Let one hour a week surge the meaningfulness felt in your life. Start your story work now.

#012 – Connection Without an Agenda

When was the last time you connected with others – whether in business or everyday life – without an agenda? You just checked in to say hello and asked, “How are you doing?” or “How’s that one thing going?” for no other reason than for the sake of connection?

I ask, because, I’ve been going through some stuff here at the end of April 2018. I had my surgery (mentioned back in episode 008) and am feeling down today. I didn’t get the greatest sleep last night, woke up to tech issues, got caught up in the tech which led to finding myself hangry from forgetting to eat. I’ve just felt kind of blue for the last hour and started reflecting on who I’ve heard from and who I haven’t since my surgery last week.

There are some people – a mentor + some really good friends, for example – who I would’ve thought I would have heard a: “Good luck with your surgery!” or “How are you doing?” on the other side of it. I’ve heard nothing, so my feeling are kinda hurt.

You know what that’s like? When you’re goin’ through something and you don’t hear from the people you care about?

Let’s face it: they’re busy and LIFE is going on, but it feels good to know they’ve went out of their way to check in and show that they care with a simple text or phone call.

On the other side of that coin, there’ve been a couple people I’ve heard from that have been a delightful surprise.

One was a past student. We were emailing back and forth – not about surgery stuff – and she remembered I had mentioned the surgery about a month ago. She just wrote, “Oh hey, how’s that going?”

The other person was who watched my kids when we traveled for the surgery. I thought my son may have been a terror and I’d never hear from her again. What prompted me to start recording this was I got a text from her asking, “How are you feeling?” a week later and I don’t even really know this person. I hired her from a site that’s similar to Care.com, but local service that’s just for sitters. She watched them for short test run and then for a couple of nights while Dave and I traveled to Atlanta. That’s it.

So, to get that text, meant the world.

I wanted to record this to bottle up how I’m feeling on both sides of that. I don’t wanna dwell on those I haven’t heard from – I get it – they’re busy. 100% there’s no ill intentions there. It’s not like they’re like, “How can I NOT reach out to Marie?” Disclaimer: Also, I’m not super needy. It’s just something I’ve noticed.

In a relationship, one thing I value most is connection without an agenda on BOTH sides.

For both parties to reach out and say, “How are you doing?” Not just a one-sided thing. There are a few relationships in my life – we’ve probably all have relationships like this – where it feels one-sided. It feels like you’re the only one reaching out to say, “Hi,” and the other person is in their own little world and you feel that.

(Or, we’re being connected to in a mass email, not true personal connection)

You care about that person, so maybe you don’t set that boundary, you let it go. Then, there’s others who treat you like that and you’re like, “Well, I’m done with this.”

So yeah, there’s a couple people I would like to have heard from and didn’t, so my feelings are a little hurt. But, not really. Like I said, they’re not doing something intentional and I don’t get hung up on that kind of thing.

I want to highlight those two people who I DID hear from.

I want to bring this full circle as a reminder:

We have the power to BE that for other people.

I have no doubt there are people – past students, customers, people I’ve crossed path with as an acquaintance, or friends + fam – who would listen to this and think, ‘Eat your own freakin’ words, Marie.’

I’m not perfect at this either. Even though I say that I value being reached out to and I’m pretty hyper aware of “It’s been awhile since I’ve talked to _____, I should reach out and set up a phone date” or “I wonder how that one student is doing,” so I reach out. But, I’m not perfect. Some people slip through the cracks.

So, I wanna bring this back to you:

When was the last time you connected with others without an agenda? Can you make a little more time to say, “Hey, how are you doing?” to both the people that matter, but also acquaintances and people you’ve crossed paths with?

I guarantee, if you lead with more of that as your to-do list actions – not something you’re doing all day, everyday. Say, 3 people a week, you check in for the sake of checking in – not ‘maybe if I reach out to them, maybe they’ll book with me’ or whatever you might want.

It’s one of the most profound things you can do as a human.

This is a testament to the couple people who reached out to me this past week. That was memorable. It speaks louder than the people I didn’t hear from – yeah I mean, that sucked – but the people I DID hear from? Their check-ins say so much about their character and you have the power to be that for someone else.

Let’s think for a sec.

Your friends, you family – the obvious people you can reach out to first – maybe it’s been a few days, weeks, months.

Or, maybe its someone you were bouncing biz ideas with and they were rapid firing their ideas at you. Check back in and say, “Oh hey, how’s THAT going? Have you made any decisions yet?”

Or, maybe it’s a simple, “Thank you.” It could be to the FIRST person who ever booked with you or the first person who commented on your first pictures that you were brave enough to share when you officially declared yourself as a “Professional Photographer” (or whatever your title is).

There’s someone in the back of my brain that I hope this ep holds me accountable for.

She’s another photographer. Over a year ago, she was starting a personal project + asking for stories from the perspective of an Alzheimer’s care givers. I sent her a FB message to tell my story as a part-time caregiver to my Grandma.

The process of writing that short story was one of the breadcrumbs in re-discovering the root of what photography does for me. Writing out that story led me further to Intentional Documentary™ and I’ve been thinking about that lately. She was just asking for stories, for her own thing, and has no idea what a big impact she made by posing that question. By creating that space for me to write, it moved something so deep in me, and I’ve been wanting to acknowledge her by sending a thank you note.

If it were me, that ty note would brighten my day, you know what I mean?

So, that’s what’s on my mind. It’s not the people I haven’t heard from. What’s exciting here is that we have the power to BE the person who does show up + care.

If you’re thinking, ‘How? There’s SO many people! Is there a tracking system?’ You can make it as hard or easy as you want it to be. Module 8 of Mastery Moment-Seekers is about re-servicing. I practiced a system for reaching out to past and potential clients every quarter. I had a binder with profile sheets and they’d move around based on my contact efforts. So yes, there’s systems you can create to stay on top of it. A system is a great idea, especially, for your business and your clients who have invested their time + money in you.

But you could have a simple list, as well. Great news, I’ve got one for you in this {free} bundle: 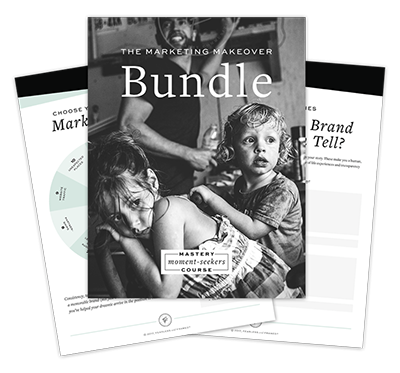 So that’s all for now.

When was the last time you connected without an agenda? Go brighten someone’s day.

Hey Storyteller... Pick one and pass this onto a friend: